THE DEVIL ALL THE TIME – REVIEW 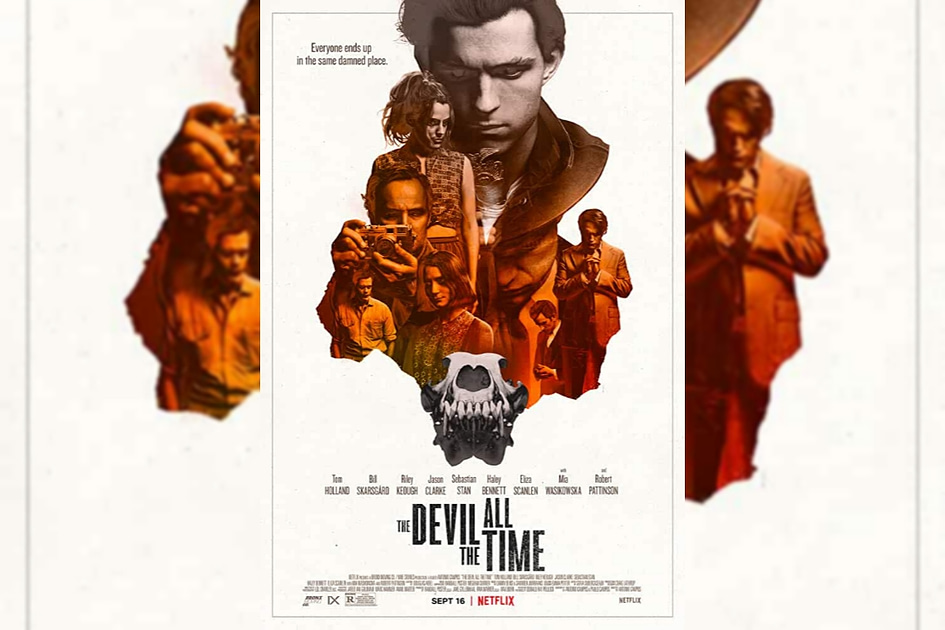 *The Devil All The Time, for quick review scroll down to Movie-meter.

Today I am going to discuss a movie that has all the elements of period drama, excellent acting, and a good thriller. “ The Devil All The Time” delivered all of these in a compact nutshell. This movie is released on the 11th of September, 2020, and distributed by Netflix.com. During the Covid-19 pandemic situation, many movies have been released on th digital platform. This movie is one of those that has made me binge watch and in the end, I can tell my time had not gone futile. Let’s talk about this:

Why I liked this:

I have reasons to like this movie and shall unfold them one by one :

This movie is a collection of great actors and their finest acting. From the protagonists to the side characters everyone acted so well in “The Devil All the Time”. Their performance made the movie glorious. The story has come into life with the performance of the crews.  I shall further discuss in this section :

The neighbourhood Spiderman is now the neighbourhood boy of silence, loneliness, and tragedy. Arvin is the main character of the film and Tom Holland has portrayed the role so magnificently that you can literally feel the drama and trauma in Arvin’s life. Tom Holland will make the audience cry in his calamity, grin in his revenge, and partner in Arvin’s solitude. Although in some places I felt Tom Holland was not feeling comfortable with the role, especially in the small and closed environment but maybe that’s what the character required.

Day by day  Robert Pattinson is turning into a flawless actor. That romantic hero is long lost in the versatility of characters played by him. In the movie “The Devil All the Time” Pattinson played the character of replacement Reverend Preston and that role was so tough. Reverend Preston might have a smaller screen presence but had caused the most pivotal effect in Arvin’s life. Robert Pattinson so terrifically played the role of the Reverend who is a treacherous person under the disguise of Gentleman that, you will be bound to hate him.  The acting as well as the accent he delivered was so convincing that, I easily understood how devil the character was. Robert Pattinson, I’m looking forward to your Batman, please deliver the awesomeness again.

I have seen her in “Logan Lucky”, “The Lodge” and she is not stopping amazing us with her skill set. Even here the role of “Sandy Henderson” is small and not so pivotal, but Riley Keough managed to take this character to another height with her acting. In the movie She is simultaneously sexy, smart, eccentric,  and confused, fighting with the self person, an associate of a serial killer. The blending of all those emotions in the right amount is not an easy task that has been executed smoothly in this film.

After the IT series and  Castle Rock, “The Devil all the time” is a movie which gave him the entrance and us the reason to watch the full movie.  Marine Willard Russell is a war veteran of WW II and the deed was done in the war never gave him peace for the rest of the life. A wife and son gave him momentary relief but after the sudden demise of his better half it became extremely difficult and so is the role, it was difficult. Bill Skarsgard has played it extremely well in his habitual way.

This is the time Hollywood should think seriously about Sebastian Stan. He is a good actor and should have some more serious screen presence like the same in “I, Tonya”, “The Devil All the time”. This movie has given him just the perfect role of Sheriff Lee Bodecker, a super selfish manipulative Lawman with a little concern for his sister. Sebastian Stan nailed the role and he is out of the shadow of ‘Winter Soldier’.

This duo played as daughter and mother respectively and in two different periods. Mia Wasikowska is a renowned actor and has done justification for her name. Eliza Scanlen did a great job by playing the role of Lenora- the orphan daughter, beloved sister, and disheartened lover. Her acting was marvelous and an asset to the film.

The fat bully Duddley Dursley of the Harry Potter series is now a full-grown man and he is not any more chubby. But the acting, a great one!  Roy Laferty is the man you will like and then hate the most. Jason Clarke was as usual natural in this movie. He is the mastermind behind the serial killer duo and with a peculiar fetish. Both of them have met together on a strange occasion like it was written in fate.

Haley Bennett, Kristin Griffith had done some great job too. They made the film complete. Watch “The Devil all the time” just for the satisfactory performance of the actors.

This is a psychological thriller movie based on the novel of the same name by American writer Donald Ray Pollock. The author also narrated the story in the movie based on his debut novel. This is a period drama also with a time span of almost 20 years starting since World War II.            The story mainly revolves around Arvin Russell’s early-stage life story, the story of his persuasion of peace in life. This is also a story of a war veteran ( with unforgettable memories) cum father, a loving mother & wife, a lonely grandmother, a serial killer couple, an innocent sister who is trapped by God!, a masked Godman, and a pet dog. As it is an adaptation of a great book, the story was solid and not cliché. Let me remind you, this is not a sad movie, though there are tragedies everywhere, but this is a story of the triumph of a struggling man for peace which he found at the end or we can hope so. But it seems to me that the creator has tried to make an unnecessary inevitable loop in the story.

Composer Duo Danny Bensi and Saunder Jurriaans have scored the music for this period thriller drama movie. The duo has created music before for famous TV series Ozark, The Outsider, the movie “The Lodge”, ‘Enemy’ etc.. In the movie “ The Lodge” and tv series “ The outsider” I found the ambient music quite special but here I found nothing so special. Overall the background scores are typical, not something original for this thriller movie. Music is not one of the key reasons for watching “The Devil All the time.”

Promising director Antonio Campos has adapted the novel into the movie. Mr. Compos has done everything to keep the movie in one space. More than three timeframes and ten important characters are dominating the plot. So it is not very easy to organize all of them and tell the story decently. In some places, the movie has some unnecessary scenes which have lingered the duration. This is a long movie! And maybe he would have considered someone else to narrate the story with a little bit of drama in his/her voice. But the director has also presented us with some of the best actings.

THE DEVIL ALL THE TIME is not a very special movie but you can spend some quality time with the film. You will feel every every emotion along with HOPE while watching and witness some great acting skills. So why not give it a shot.

Tell me in the Comment section, how do you like “The Devil all the time.” Before that check out the movie-meter.

Check our other blogs here .