THE LITTLE THINGS- A SIMPLE REVIEW 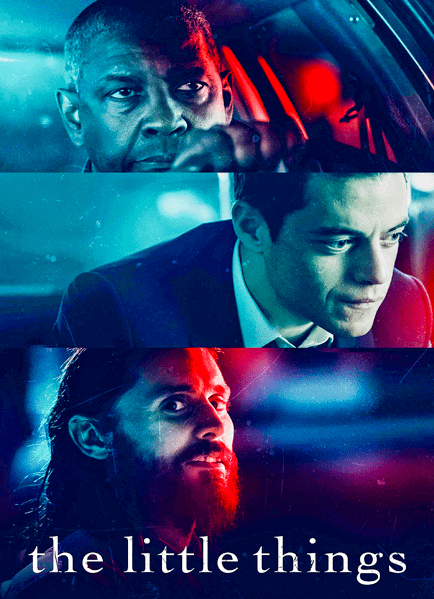 Hello everybody! Hope you all are doing well. From now on I would try to give a new movie review every week. Keeping that in mind, today I am going to review a movie that is one of the most anticipated movies of this year. This movie has three protagonists and three of them are Oscar winners. The director John Lee Hancock has delivered us some fine movies like The Blind Side, Saving Mr. Banks, The Founder, etc. Yes, you have guessed it right, I am talking about “The Little Things”. You can check the Moviemeter now to get a rough idea and then can read the full blog for an elaborate review. This blog doesn’t contain any major spoiler!

The Little Things is a Neo-noir movie with thrill and suspense, but I think overall this movie is a good Drama. Let’s talk about the movie likes and dislikes.

Why I liked The Little Things:

First, let me say the reasons I liked this movie:

Though from the trailer it looked like some old story from a new angle. The same young ladies’ serial abduction and murder type story. But The Little Things is more than that. This is a two hours long movie. But I could not understand where the time flew away, the story made me so involved in the movie. The story is so much true, it shows some of the inevitable facts of life. This movie involved our hidden emotions like Guilt, Scare, and Anger. These are the little things that made us human also.  Watch this to get the feeling that sometimes something like that happened in your life also ( I’m not being offensive here).

If you had followed the trailer you would know how terrifically brilliant the theme music was. The music is composed by 15 times Oscar-nominated musician Thomas Newman. This man has mesmerized us in Skyfall, amazed us in Wall.E, inspired us in  The Shawshank Redemption, and many more with his music for more than 30 (thirty) years! The theme music of The Little Things is so intense and classical, it matched perfectly with the pace of the movie. The composition made the movie more worthy. Enjoy the trailer music here:

Authentic Acting in The Little Things:

If your eyes and brain soothe by watching good performances in a movie, then you can look at this one for ultimate peace of mind. Though the side characters in The Little things don’t have any pivotal role, the protagonists had given their fullest effort to make the film alive. I shall try to discuss them one by one:

None of the protagonists especially Denzel Washington needs no introduction. He is one of the finest actors of this era. He has played the role of a present deputy sheriff and a former detective with his dark history. In this movie, he has beautifully depicted Joe “Deke” Deacon,s agony, experience, calmness, and letting go attitude. He is restless and active during the whole movie.

I loved his performance in Mr.Robot and Papillon. Here he is the new age detective of LASD who is currently in charge of the abductions and homicides. He is a very talented actor but I found nothing much for him in the script. It was all methodical.

Though he has the least screen presence, his performance earned a Golden Globe nomination. A few strong dialogues were given to Jared Leto and he delivered them at another level of perfection. He rocked in the movie and the last minutes were more intriguing just because of his acting. Watch this film for his act.

Overall the acting and chemistry between the actors especially the dilemma of Det.Jim Baxter. The calmness of Sparma and the haunting of Deacon’s past made the movie watchable at a point.

Let’s talk about the bad sides. These are the points that stopped the film from being a perfect movie to me.

Though I have earlier said that 2 hours of this film is not boring but it was tedious. The director could have edited a few more scenes.

Too straight without any conclusion:

We have seen this conscience and murder before, like Devid Fincher’s masterpiece Se7en. This movie is also too direct to our emotions and lives. But a conclusion and answer to the crime mystery are needed as the Crime of “abduction and Murder” is not the main theme of the movie. So it lefts you with agony, not with realization and awe.

Hence I think it is a one-time watchable decent movie. Watch it for good acting and some moments. Whether you agree or not with me please Share and comment. See you all next week.