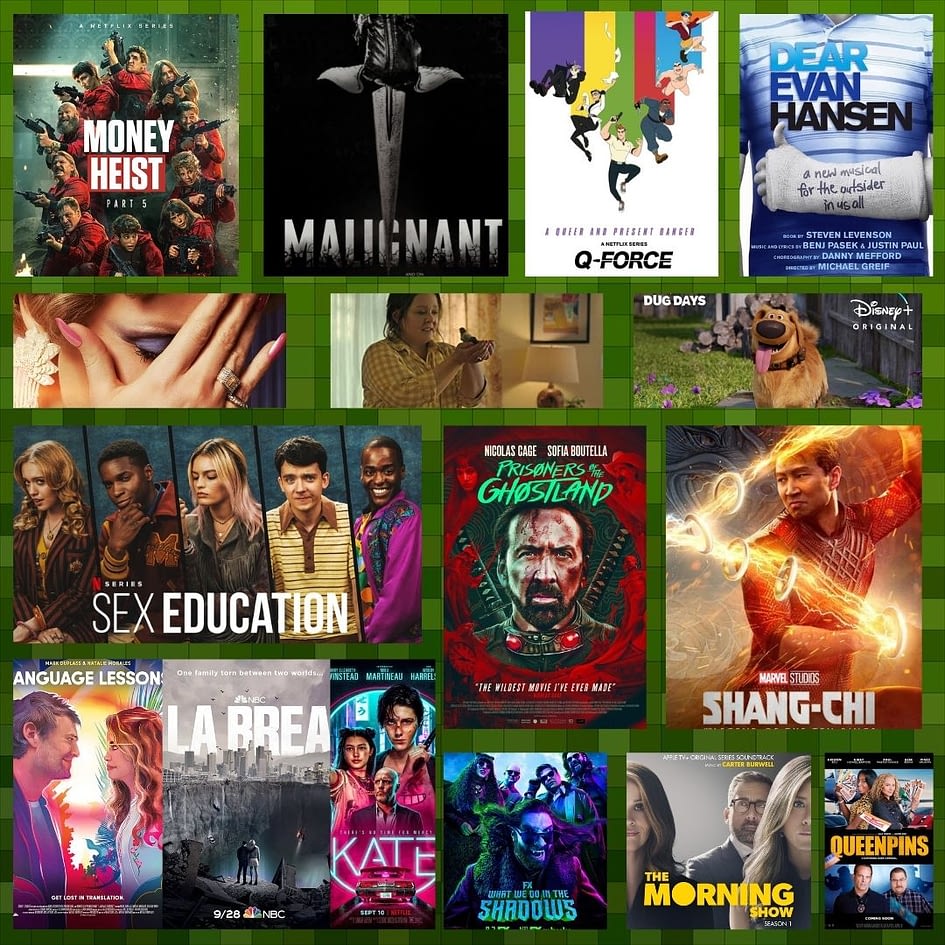 Time for a new list, for a new month. So Let’s talk about the mandatory watch movies and Tv-series of September 2021.

MOVIES to watch in IN SEPTEMBER 2021

This movie is going to release at the end of the month, but to me, this is going to be the best movie of the month. The story is about the life of socially anxious Evan Hansen and his realization about the positive sides of life after a tragedy happens. The story already won Tony and Grammy awards. This one is a musical also.

SHANG-CHI AND THE LEGEND OF THE TEN RINGS:

Get ready for another awesome Marvel movie. This time it is based on some legendary Kungfu and the theme music given by DJ Snake(listen to it). From the trailer, everyone liked the performance of Awkwafina and Simu Liu. There is Benedict wong and Ben Kingsley also. Tim Roth is the antagonist. some crime/romance/comedy and John Boyega, Olivia Cooke, Bill Skarsgård, Ed Skrein.

PRISONERS OF THE GHOSTLAND:

This is going to be a hell of a movie that came from the bizarre mind of Sion Sono. Nicolas Cage is going to blow your mind with his performance and power delivery. He is a prisoned criminal here and will be released by resuing an abducted mafia daughter(played by Sofia Boutella).

Wanna get scared by this time’s best horror director James Wan. Then watch Malignant this month in a Cinema. Annabelle Wallis is the protagonist with a traumatizing clairvoyance capability.

If you loved the story and action sequences of Boss level and The A-Team, you will love this movie for sure. Because these three movies have one thing in common, Joe Carnahan as the director. Frank Grillo and Gerard Butler are in the lead roles.

This is going to be…………. What can I say, a beautiful movie. Enjoy this movie with an open mind and relish the story with Justin Chon,  Vikander, and Mark O’Brien. Fingers crossed for a happy ending.

Whenever you find a Clint Eastwood-directed movie with Clint Eastwood in it, just sit down, relax, and enjoy the epic. Cry Macho is a story with thrill and lessons of life.

This is another beautiful couple movie and an inspirational movie starring Melissa McCarthy, Chris O’Dowd, and Kevin Kline in main roles.

THE EYES OF TAMMY FAYE

This is a biographical movie starring Jessica Chastain and Andrew Garfield as the protagonist couple. It is one of the most hyped movies of the month.

Keep this movie on your bucket list. This movie is about the friendship/relationship between a language teacher (Natalie Morales)  and her student (Mark Duplass) over video classes.

A good action movie on female assassin protagonist which is played by Mary Elizabeth Winstead and accompanied by veteran Woody Harrelson. The trailer made a good impression.

A movie on historical facts(9/11) and now there are Michael Keaton, Stanley Tucci, and Amy Ryan. What more do you need to watch this beautiful piece!?

Let’s enjoy and relish Jamie’s struggle and adventure towards becoming the Drag Queen, and support him with our heart.

I would like to mention the following ones as special ones for this month:

TV-Series to watch in IN SEPTEMBER 2021

Remember that two Oscar-winning beautiful animated movie UP (2009)? This one is a short spin-off series of the movie. This one is going to be utterly entertaining.

WHAT WE DO IN THE SHADOWS:

Our favourite vampires are back. Look out for new adventures in their daily life.

The most awaited returning series of the year. Professor and his company resuming their job from where they have left.

When I read the description on IMDB .com, became delighted by its unique storyline. And it’s an animated web series, so a must-watch may be another “Invincible” like classic web series.

Based on a famous comic series, but it’s not an animation series. The story is set in a post-apocalyptic world and Y is the last surviving male on the planet.

It is back for season 2 with its heavyweight casts and for some new dramas.

After winning for back-to-back two seasons, this coming-of-age drama is ready for the third season.

I suppose this is going to be an amazing science fiction web series with a unique story.

Lucifer and ACS: Impeachment with the new season.

So this is the complete list. Hope you will enjoy September. Let me know by commenting below and feel free to add to this list.

Blog, Movie & Others, What to Watch